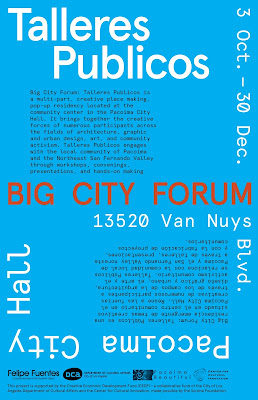 Big City Forum: Talleres Publicos will bring together the creative forces of numerous participants across the fields of architecture, graphic and urban design, art, and social and community activism. Talleres Publicos will occupy the community center site at the Pacoima City Hall to engage the community of Pacoima and the Northeast San Fernando Valley through workshops, convenings, and hands-on making projects in order to produce various forms of creative material based on personal and collective actions that begin to redefine public engagement.

The launch for Talleres Publicos will take place on Saturday, Oct. 3rd and will include a hands-on workshop by the collective Confetti Confidential. This event will be open to the public from ages 5 to 95 to celebrate the vibrancy of Pacoima and the launch of this engaging project.

The community is invited to come together and create freestyle collage in celebration of the launch of Talleros Publicos. Collage is a technique of composing a work of art by combining various materials not normally associated with one another on a single surface. It is an easy and fun form of expression available to anyone who is willing to try!

The complete schedule for Talleres Publicos:


"This project is supported by the Creative Economic Development Fund (CEDF)--a collaborative fund of the City of Los Angeles Department of Cultural Affairs and the Center for Cultural Innovation, made possible by the Surdna Foundation."
Posted by Big City Forum at 6:14 PM 9 comments:

Proximity. The nearness of one to another. A slight glance, a trace. A scent that changes the taste of a mouthful of wine from one moment to the next. In between and amongst friends. Eye contact. A demure smile and a slight blush. The point of tension where two lines intersect. Aware that N. is still looking at you, continue to listen intently to T. Bodies become thoughts, phoneme, fantasy. You reply, “yes.”

Big City Forum presents “After Hours” a series of monthly gatherings that merge the art, design, and architecture communities of Los Angeles. After Hours invites exceptional individuals to engage in intimate conversations with a select audience. Curators, architects, designers, collectors, musicians, filmmakers share and reflect on their passions, what they've learned through experience, and their development of agency and hope. “After Hours” is a casual discursive ambiance to explore a better understanding of art and life.

The inaugural convening of “After Hours” will take place at INHAUS in Altadena on Saturday May 30th, 2015.

Organized in collaboration with some times, “After Hours” will feature REDCAT curator Ruth Estevez in conversation with architect Wonne Ickx, and a performative meditation on collaboration by Joey Cannizzaro. Supper, wine, and libations will be served.

“After Hours” continues Big City Forum’s interjections into the Los Angeles creative community to promote creative interdisciplinary dialog as a means of motion and change.

for tickets to event:

Wonne Ickx (Antwerp, 1974) studied civil engineering and architecture at the University of Ghent, Belgium and the ETSAM in Madrid, and Urban Studies at the Centre for Metropolitan Studies (CEMET) in Guadalajara, Mexico. In 2006 he founded his own studio PRODUCTORA in Mexico City, together with Abel Perles, Carlos Bedoya and Victor Jaime. PRODUCTORA has received numerous national and international prizes and recognitions. Recently they were selected as ‘emerging voice 2013’ by the Architectural League of New York and in 2014 the Spanish editorial 2G will publish the second monograph on their work.

Wonne Ickx has been teaching architecture and urbanism at the Universidad Iberoamericana, Universidad La Salle and Centro de Diseño in Mexico City. He has lectured worldwide about his work. He is founding director of LIGA, Space for Architecture, Mexico City, an independent exhibition platform that since 2011 promotes young architects from Latin American. He is also part of the editorial board of Arquine since 2010.

Ruth Estévez is the gallery director and curator at Roy and Edna Disney/CalArts Theater (REDCAT) in Downtown Los Angeles. Bilbao-born Ruth Estévez was previously at Museum of Contemporary Art Carrillo Gil in Mexico City; while in Mexico she co-founded the nonprofit LIGA, Space for Architecture. At REDCAT, she’s worked with artists including Pablo Bronstein, Javier Tellez and Allora & Calzadilla. Among upcoming projects are Hotel Theory, a group show looking at the performance of theory, and, in collaboration with The Getty Institute, a re-staging of a performance piece by the late Argentinian artist León Ferrari, who deployed sculpture and poetry as “revolutionary weapons” against war, political authority and religion.

Joey Cannizzaro is an undisciplinary artist. Cannizzaro, along with Danielle Bustillo, co-founded The Best Friends Learning Gang – an experiment in disorderly, amateur education – and is also a member of neverhitsend, a collective that performatively researches communications ideology, surveillance, and privacy. Cannizzaro's work has been shown at 356 Mission, Machine Project, Centre Pompidou, Flux Factory, REDCAT, ForYourArt, some times, and a lot of other places. Cannizzaro holds an MFA from California Institute of the Arts, is a Distinguished Professor Emeritus at Los Angeles College, and is currently a bartender at REDCAT.

some times is a neon sign that can be plugged in anywhere. It is also a performance, a platform for collaboration, and sometimes, a bar. some times opened in 2014 as a response to artists’ needs at the California Institute of the Arts; it has since relocated to the kitchen of an internet company office in downtown LA and occupied the office of ltd los angeles. some times is owned and operated by artist Meghan Gordon.

INHAUS is the Altadena home & garden residence of Angel Chen and Dermot Begley and serves as location for site-specific arts programming. It hosts dinners, conversations, ceremonies, and workshops.

“In an organic symbiotic relationship, INHAUS pairs with organizations that are by nature nomadic to bring their content to our space. We fill a need by giving a place to conversations that can fully flower in an intentional environment that is both inviting and safe. The space is warm, welcoming, nurturing, comforting, open to all dialogue and points of view. Being an attendee at institutional lectures around the city, we have discovered a need for a salon-style place that opens deeper conversations in a relaxed environment conducive to community building and enabling diverse artistic practice. We act as a home base to foster community through sharing resources, equipment, library, and a philosophy of refocusing our definition of home and work in an outdoor-centered lifestyle.”

Big City Forum (BCF) founded by Los Angeles-based artist, educator, and activist Leonardo Bravo, is an independent, interdisciplinary project that explores the intersection between design-based creative disciplines within the context of public space, the built environment, and social change.