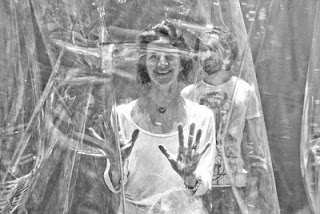 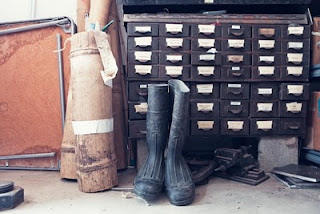 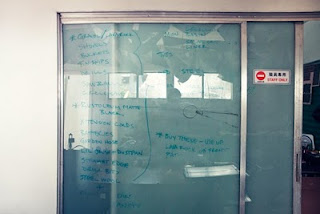 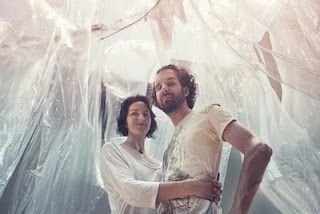 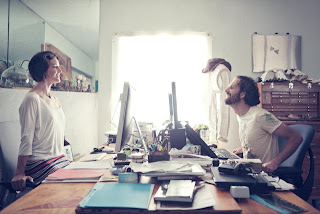 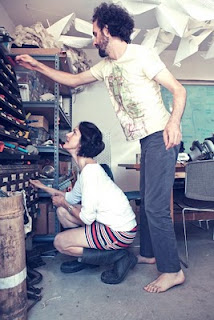 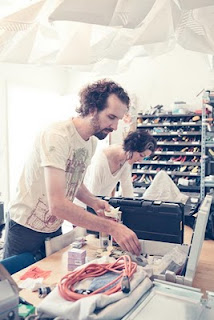 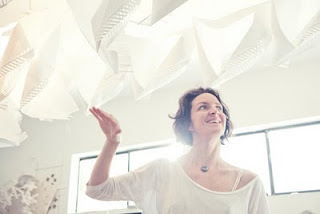 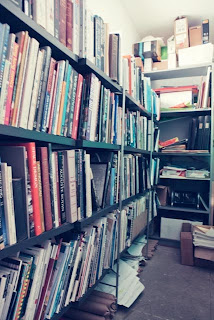 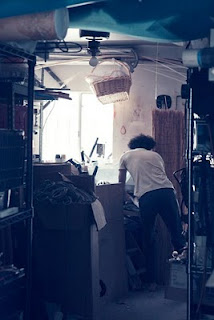 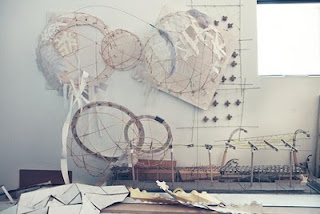 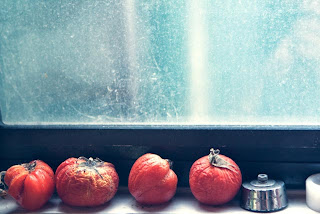 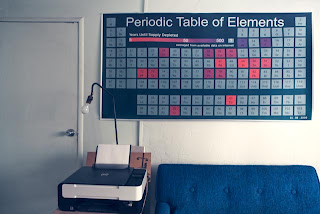 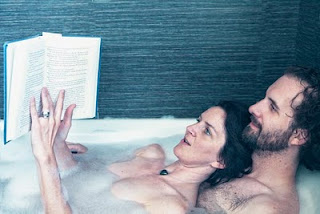 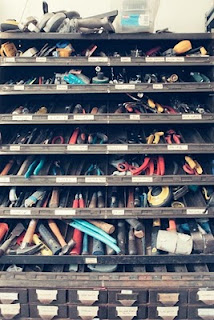 All images and text by Anais Wade.

1. How do you define your partnership?

O: Jenna does all the work and if anything goes wrong she blames me!

J: Oliver does all the work and if anything goes wrong it's my fault!

O: I often do the shape of things and Jenna does the details. That’s what happened on the food pyramid.

J: I did the mechanical, the system, the plumbing. Oliver was the concept guy to an extent, but we had developed the idea a year ago here together with some friends at M&A based on concepts I’d learned through studying Permaculture Design. The vertical configuration using stepped basins came out of an idea I had inspired by a Chinese natural geological stepped formation I’d seen in a photo. But most of the time it is hard to trace where the concept originated.

O: Pretty much always! We’re working on so many projects at once and we don’t really monitor each other’s status. We have a weekly meeting. I work on a different project every hour or two during the day to kind of keep it fresh, and I usually weave ideas from many different angles simultaneously. We keep all that stuff kind of up in the air, it stimulates us, because we have a lot of (overlapping) - complimentary? - experience. It’s more of a matter of how we choose to challenge reality, how we choose to accept the limitations that we have, which ones we want to overcome and which ones we want to take it easy on.

2. What did you want to be when you grow up?

O: Yeah me too! Toy designer actually when I was in 6th grade… and that was after I wanted to be a time traveler. I got that space shuttle operating manual when I was a kid and looked at all the escape systems and the emergency protocol.

3. What are you now? An Artist, a curator, a designer, an engineer?

J: I’m several things now, I can be a chameleon. We’ve infiltrated the world of architecture. People often think we’re architects because of Materials & Applications. In fact it is an art project. We invite other people to come and create their projects with us. What we like to do in our public art and M&A is creating a condition that the public can participate in at various levels. The goal is to dramatize or make tangible and visible forces that apply, sometimes those are social forces, but they vary widely depending on the site - like sometimes we look at weather systems.

O: I think we definitely transcended the title thing a couple of decades ago when computers became really accessible, and we see that the difference between specializations often times is the tools and not the knowledge. M&A does speak to that transcendence of specialization, and relies on the idea that when you are not tethered to specific fields and allow yourself to wander in the interstitial spaces you can create more things that are more imaginative, but that’s just the beginning of it! The installations are a residue of this exploratory process. I’ve only started recently using the term artist and it really comes from the fact that after enough exploration the art field is the only one that can embrace what we’re trying to do. Very few fields are able to accept that kind of exploration.

J: The same way that New York is the gateway for Europeans, San Francisco is the gateway to the West for mid-westerners. I had been in SF for several years building robots working with the robotic art scene in the mid-90s and I was not able to find work that was in a related field, like special effects. People told me I should move to LA. It has been 12 years and I have no intention to move back to San Francisco. San Francisco is a great community but LA is a place where I can have an impact through M&A. This is where journalists, writers, directors are living, people that are making culture for the rest of the world. This is where we can influence the culture.

5. How do you define public space / private space?

O: We invest our identities a lot into space making, we find comfort in a lot of different places simultaneously. A big part of our work is about sharing public space and trying to inspire people to rethink how they communicate with their space . I hope that people start to understand that their own facade, yard is an opportunity for them to communicate and transform their lives in a significant way. We have a very limited vernacular on how to use public space. A lot of it is based on safety, a lot of it is based on extremely bizarre and antiquated concepts. Our neighbor plants seeds for his grass every 6 months and ties up little strings and little things to scare away the birds and signs that say “don’t piss on the grass”, there’s no rational purpose to any of that. Breaking out of that is very important.

J: My career path has been loosely focused on ideas of what is public/private and how you engage the public in a public space. M&A is a public pocket park. Sometimes it is our front yard and we’ll close the gate and have a nice little meal, and then it becomes public again. I love that private space and public space can be modulated. The difference then, is one of access, of expectation. When you enter a public space you expect things to be safer, cleaner. Private space is more of an accretion. Public space is an expression that is more deliberate.

6. How did you get to your current work? Was there an "ah!" moment, or was it more of an organic process?

J: For me it was when I met Oliver and started working together. We share this passion for invention, mechanical systems, electrical systems, responsive systems, the landscape and architecture. We needed to find a term that could embrace all these fields, so we made up “infranatural”, which embodies infrastructure and natural systems. It was that moment of synthesis that brought us together.

7. One feature idea that expresses your work

O: There’s one I think more about these days: the Cloud Line idea. We both throw around ideas all the time, but the reason why the partnership is so good is that we’re not just interested in ideas, we’re interested in implementation. An example that is totally outlandish, is the Cloud Line. We were asked to submit ideas for the future of LA transit. I got fixated on the idea of blimps tethered to a cable system that goes along the Hollywood Hills from the Dodger Stadium out to SM cliffs. And there’s stops along the way where you can get out and travel down the hill on buses and bikes. It creates clouds in LA because we don’t really have weather. My friend who’s an airship designer said it’s very difficult, but the idea continues to move forward. Everybody I tell loves the idea. The great part is that we have endless ideas like that. There’s so much energy created by others enthusiasm for ideas like that, that you never know which will suddenly become a project.

J: The idea that maximizing the efficiency of a system through careful design of materials and applications can result in a beautiful solution. Being efficient doesn’t mean straight spare lines and Bauhaus-style asceticism. It can mean the effortless spiral of a vine searching for the sun as it methodically pushes out leaves and blossoms - even creating a surplus of leaves and blossoms so that damage to some of these won’t impact the overall functioning of the system. I think one feature that expresses our work is that we look very closely at the flow of energy through a system - and rather than duplicate that in simple mimicry, we look for a pattern that can be adopted to a specific site, a specific application, every time. One size does not fit all.

8. What is the most innovative aspect of your work?

J: The website for M&A is emanate.org. Ideas emanate from this place. Ideas that can affect the entire world. We explore the feasibility of various concepts and want people who are interested to participate in their conceptualization and construction. The big idea now is to engage public space even further out into LA; other communities that are scabbed over by small interstitial blighted areas that could be transformed with greening, new low impact design standards, water infiltration techniques as well as public art. I am really excited about the potential of this fusion of art and ecological design and community engagement; these are three fields we’ve developed some expertise in, want to have an impact on and create continuity by helping communities in the long term. The idea would be to use M&A as a proving ground, remount the projects elsewhere, and transfer skills to the people in the new community where the project is going to live by inviting them into the entire process. It is about urban acupuncture.

9. What’s your best advice to the new creative generation?

O: My perspective is that you learn a lot from doing things. There’s a real benefit and a lot to be learned from the master-apprentice traditional system. I was in school until I was 14, I didn’t learn that much. When I started working for other people I learned everything. With the way M&A is set up, we encourage people to learn from one another. It’s not like you need a master and apprentice to form that relationship, you can learn from everybody. It’s a matter of working together with people who have skills that you want to learn and sharing the skills that you have. Not recognizing the boundaries that have been set up by academia or by industry, and rather trying to stimulate one another’s creative interest and trying to support one another. With the internet it is a bottom up educational system now, and sharing knowledge is incredibly important for the future. We see people who are unemployed and can’t find jobs because they have a very minute idea of what they’re capable of doing. They’re been programmed to believe that if they’re not doing this particular trade, they have no place in the world. It's shocking. Artists are the ones who should overcome that.

J: The key with being an artist is not to constrain yourself to a single track and try to get in a gallery and get shown. If you are an artist you have some really valuable skills that you can use to engage the rest of the world. I like to think that there are a lot of different types of personalities of people who become artists - and professionals who think and act creatively, and encourage them to take that energy and apply it to their fields. If your work is uninspiring, and you can’t break the routine there, then there’s a lot of volunteer options out there! And artists: Don’t wait for galleries to show your work!

O: There’s a lot of interesting of guerilla art in the area. Showing your work is effortless, there’s an infinite amount of possibilities!
© 2010, Big City Forum
Posted by Big City Forum at 11:43 AM